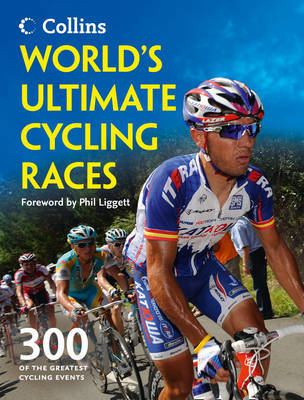 From Europe to Asia, via North America and Africa, choose your own adventure from among 300 of the world's greatest bike rides and best cycling races, featuring our pick of the must-ride sportives and gran fondos where you can really test your legs against both the terrain and your fellow riders. Cheer on the world's top professionals from the roadside as they take on the Tour Down Under, or head into the Alps to watch the sport's greatest riders tackle the Tour de France. Conquer the US yourself on the Race Across America, or mountain bike your way through South Africa on the Cape Epic. Compiled by cyclists and covering all types of cycling from cyclo-cross to long distance road races.

This list of ultimate cycling races is compiled by Ellis Bacon with contributions from some of the world's leading cyclists.

Ellis Bacon is one of Britain's most experienced cycling journalists, and has written on the sport for a number of publications, including The Times and The Observer, as well as being a regular contributor to Cycle Sport and Cycling Weekly magazines. A fluent French and Danish speaker, he has translated a number of books including the English version of Danish Tour de France winner and Saxo Bank manager Bjarne Riis's autobiography.