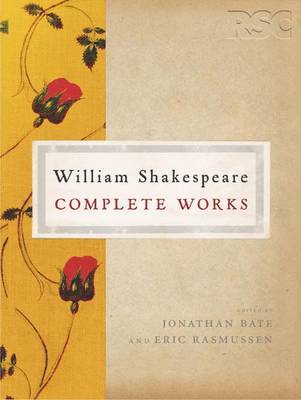 The RSC Shakespeare: The Complete Works

This is the first and only edition to be developed by and for the Royal Shakespeare Company, the world's leading Shakespeare theatre company. It is illustrated with photographs of performances chosen by RSC Directors. It is beautifully packaged, with clear, reader-friendly single-column page design on crisp white paper. It features outstanding on-page notes which explain words and phrases unfamiliar to a modern audience, including the slang, political references and bawdy humour often ignored or censored in competing editions. It is a definitive modern-spelling edition of Shakespeare's text based on the 1623 First Folio. It is suitable for undergraduates or A-level students of Literature or Drama; lecturers or teachers of Literature or Drama.It is also suitable as birthday, christmas, wedding or graduation gifts. It is useful in Public Libraries, Academic Libraries, School Libraries.Developed in partnership with The Royal Shakespeare Company, this fresh new Complete Works combines the very latest scholarship with elegant writing and design. Leading the editorial team is renowned Shakespearean scholar Professor Jonathan Bate who has worked in close collaboration over many years with the artists and archivists at the RSC. His introductions and notes draw on a unique wealth of experience and resources and will help the reader to understand Shakespeare's plays as they were originally intended - as living theatre to be enjoyed and performed.

'One of the virtues of the approach Bate and Rasmussen have taken is to offer fresh ways of presenting the plays' - Peter Holland, TLS 'This new Complete Works from the RSC is a glorious edition of one of the world's most important books. It's the essential reference book for anyone who's ever been in love, felt jealousy, fear, hatred, or desire. All human life is here - and every home should have one.' - Dame Judi Dench 'The paper quality and page design are excellent, and the illustrations in the introductory materials are lavish and well reproduced ...a virtual comet-tail of supplementary materials are to be found at www.rscshakespeare.co.uk - the RSC is certainly the first edition of Shakespeare to provide a link to it's editor's blog... Bate's general introduction to Shakespeare's life, stage and reputation is superb, and the short introductions to individual works, in particular, are among the best of their kind available...they manage to speak about what really matters about the plays to readers who wish, whether they are already familiar with them or not, to come to them freshly.' - Michael Dobson, writing in The London Review of Books 'Timely, original, and beautifully conceived, the RSC edition makes Shakespeare's extraordinary accomplishment more vivid than ever.' - James Shapiro, Professor, Columbia University and prize-winning author of 1599: A Year in the Life of Shakespeare 'Everything about this edition is outstanding. To begin with, it's an attractively produced volume of the plays based on the 1623 First Folio, the landmark Shakespeare edition. Second, it's the work of two fine scholars who have harvested the labours of many experts to produce an edition that contains the fruit of the best contemporary research. Third, this exemplary text has greatly benefited from the active involvement of the RSC, a company whose recent work has exhibited an almost obsessional devotion to the meaning of Shakespeare's words in performance.' - Robert McCrum writing in The Observer 'A handsome volume...printed on fine paper and elegantly designed... This is a beautiful book that will be a pleasure to own.' - Good Book Guide 'Professor Jonathan Bate has written thought provoking essays for each play, discussing the source material and its influence on the play as well as pointing out the familiarities...for...contemporary audiences... The glossary includes much that has been ignored in the past, enlightening the new student...as well as adding to the vocabulary of those who have been enjoying his plays all their lives... This volume is an invaluable resource to anyone interested in or simply in love with Shakespeare.' - Speech and Drama '... anyone who wants a good single volume edition of the plays... won't do better than this.' - Tribune 'Bate provides excellent introductory essays to each play and his terrific introduction, simply and effectively summarising everything you need to know about Shakespeare, man and work, is alone worth buying the edition for.' - The Daily Express 'Thanks to Bate and Rasmussen, we now have a rendering of the Complete Works that, in a rare publishing achievement, would also give complete satisfaction to the author himself.' - Robert McCrum, The Observer 'A magnificent new volume.' - A. N. Wilson, Daily Telegraph 'A triumphant addition to our times.' - Fiona Shaw, The Times 'This outstanding new edition of Shakespeare's plays is the closest yet to the originals ... a new and thoroughly radical edition ... supervised by Jonathan Bate, an outstanding scholar (and author of the best existing biography of Shakespeare) who writes with as much elegance as insight about the making of theatre and the creation of the plays... an impeccably informative introduction gives a comprehensive theatrical, social, political and biographical context to the plays. There are pithy essays, also by Bate, to introduce each play as well as exemplary notes at the foot of each page which translate verbal and topical obscurities ... for actors and directors it will be incomparably useful, but for any curious reader of Shakespeare's plays it provides an invaluable guide to reading them not as novels or dramatic poems, but as they were intended to be read: blueprints for live performance.' - Richard Eyre, The Sunday Telegraph 'Excellent, succinct notes and introductions to each play.'- John Carey, The Sunday Times 'A splendid edition. The general introduction is among the best 50-page guides to Shakespeare you could hope to find, while the short essays prefixed to each play are like the best kind of programme notes - informative, thought-provoking and humane. Marginal notes help readers imagine what's happening onstage ... The RSC's edition tells you all you need to know about the life, but also, vitally, allows you to lose yourself in the wonder of the works.' - Dr Colin Burrow, All Souls College, Oxford University, writing in The Evening Standard 'This is a handsome and fascinating edition, elegantly set and easy to read.' - The Australian

JONATHAN BATE is Professor of Shakespeare and Renaissance Literature, University of Warwick, UK. He has held visiting posts at Harvard, Yale and UCLA and is a Fellow of the Royal Society of Literature, a Fellow of the British Academy, an Honorary Fellow of St Catherine's College, Cambridge, and a Governor and Board member of the Royal Shakespeare Company. A prominent critic, award-winning biographer and broadcaster, he is the author of several books on Shakespeare, including The Genius of Shakespeare (Picador), which was praised by Sir Peter Hall, founder of the RSC, as "the best modern book on Shakespeare." In June 2006 he was awarded a CBE by HM The Queen 'for services to Higher Education'. ERIC RASMUSSEN is Professor of English at the University of Nevada, USA. He is co-editor of the Norton Anthology of English Renaissance Drama and has edited volumes in both the Arden Shakespeare and Oxford World's Classics series. He is the General Textual Editor of the Internet Shakespeare Editions project - one of the most visited Shakespeare websites in the world. For over nine years he has written the annual review of editions and textual studies for the Shakespeare Survey.

Preface; J.Bate General Introduction; J.Bate A User's Guide Preliminary pages of the First Folio Foreword; M.Boyd, Artistic Director, Royal Shakespeare Company WILLIAM SHAKESPEARE: COMPLETE WORKS For each play: Individual introduction by Jonathan Bate On-page footnote gloss which explains unfamiliar or obsolete words and classical, biblical or contemporary references where WS assumes audience knowledge Appendices of any significant passages that are not in First Folio 'Key Facts' box with: plot summary, major roles, date, linguistic medium, sources, textual notes COMEDIES The Tempest The Two Gentlemen of Verona The Merry Wives of Windsor Measure for Measure The Comedy of Errors Much Ado about Nothing Love's Labour's Lost A Midsummer Night's Dream The Merchant of Venice As You Like It The Taming of the Shrew All's Well that Ends Well Twelfth Night, or What You Will The Winter's Tale HISTORIES The Life and Death of King John The Life and Death of King Richard the Second The First Part of Henry the Fourth, with the Life and Death of Henry surnamed Hotspur The Second Part of Henry the Fourth, containing his Death and the Coronation of King Henry the Fifth The Life of Henry the Fifth The First Part of Henry the Sixth The Second Part of Henry the Sixth, with the Death of the Good Duke Humphrey The Third Part of Henry the Sixth, with the Death of the Duke of York The Tragedy of Richard the Third, with the Landing of Earl Richmond and the Battle at Bosworth Field The Famous History of the Life of King Henry the Eighth TRAGEDIES The Tragedy of Troilus and Cressida The Tragedy of Coriolanus The Lamentable Tragedy of Titus Andronicus The Tragedy of Romeo and Juliet The Life of Timon of Athens The Tragedy of Julius Caesar The Tragedy of Macbeth The Tragedy of Hamlet, Prince of Denmark The Tragedy of King Lear The Tragedy of Othello, the Moor of Venice The Tragedy of Antony and Cleopatra The Tragedy of Cymbeline PLAYS NOT IN THE FIRST FOLIO Pericles, Prince of Tyre, by William Shakespeare and George Wilkins The Two Noble Kinsmen, by William Shakespeare and John Fletcher POEMS AND SONNETS Venus and Adonis The Rape of Lucrece 'Let the bird of loudest lay' (also known as 'The Phoenix and Turtle') 'To the Queen' Shakespeare's Sonnets A Scene from Sir Thomas More (Introduction, transcription and modernized text by Eric Rasmussen) CHARTS Shakespeare's Works: A Conjectural Chronology Kings and Queens of England: from the History Plays to Shakespeare's Lifetime The Houses of Lancaster and York: A Genealogy The history behind the histories: a chronology The history behind the tragedies: a chronology Alphabetical Index of Plays and Poems